SOLO ORGAN / ATOM HEART AND BEYOND THE INFINITE 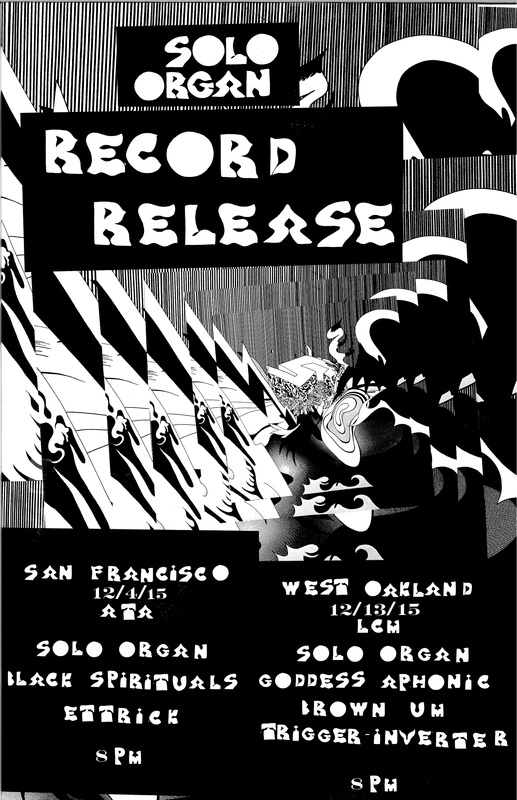 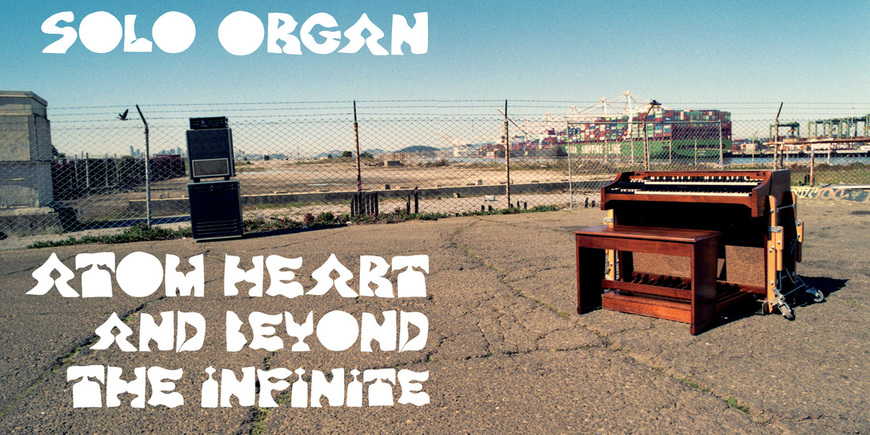 SOLO ORGAN "ATOM HEART AND BEYOND THE INFINITE" LP

We here at the hive played a hand in the visuals for our favorite metaphysical channeler of hammond organs and cosmic aural doom, filmmaker DOUGLAS KATELUS's musical project, SOLO ORGAN.

READING AT MISSION COMICS AND ART 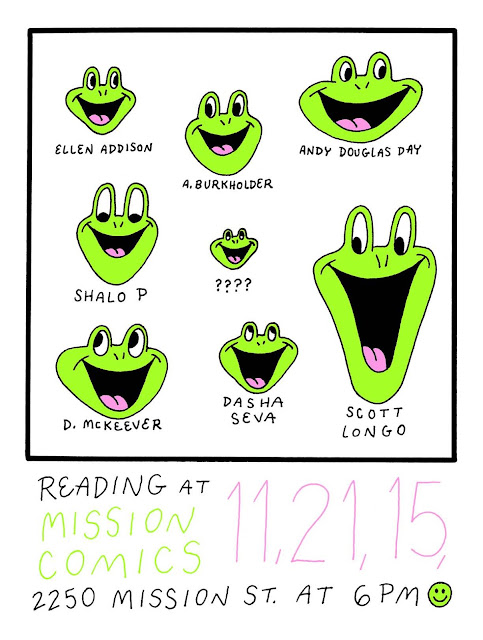 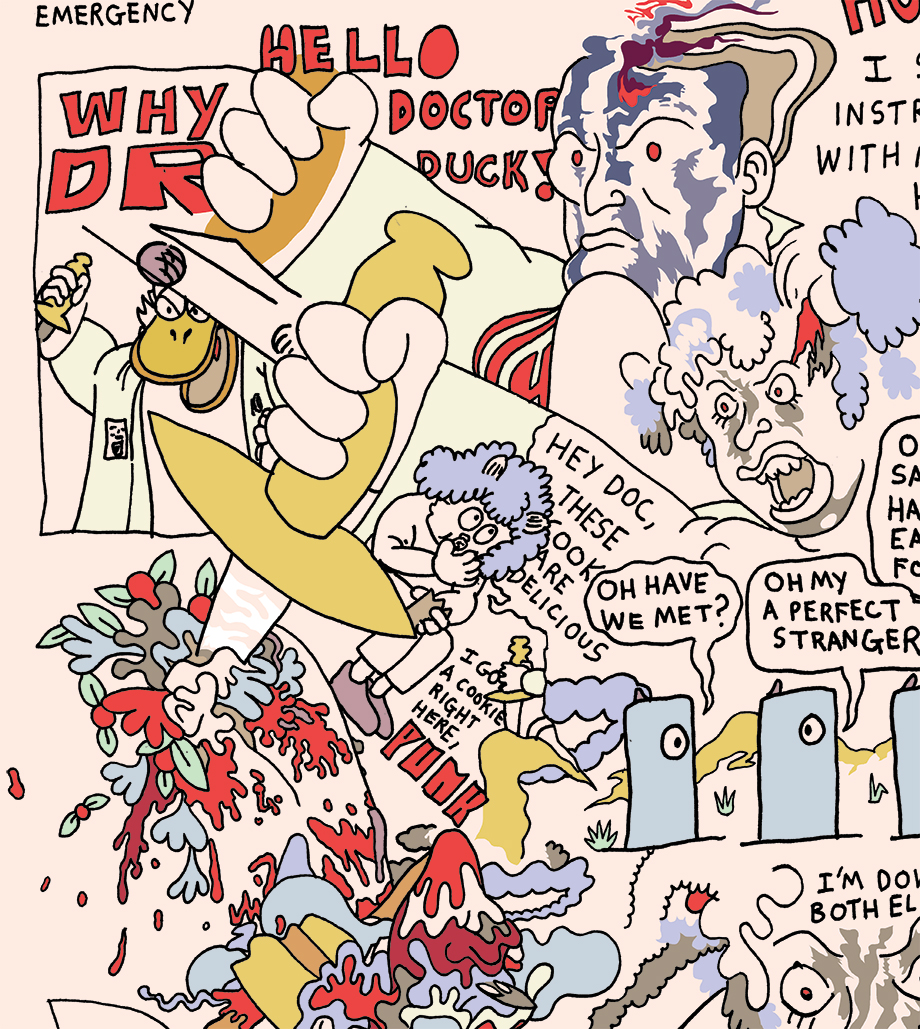 They came down from Carson City. A few travelled on the backs of bears.
Some made home between the panels of pages, tunneling to China through a piece of paper with self-reflexive VIGOR.
I came in where the story went strange, "Saturday's Alright for Fury" was promptly placed behind me, as the title came on while I broke my way into the SFMoMa to pee on some paintings. Quiet night on the east garden letting the wind manhandle my mad nakedness. Then I thought about all that jazzy new material I had set to be READ ALOUD by someone dressed just like me (same face, same hair, glasses, everything) pretty darn soon.


Posted by Shalo P No comments: 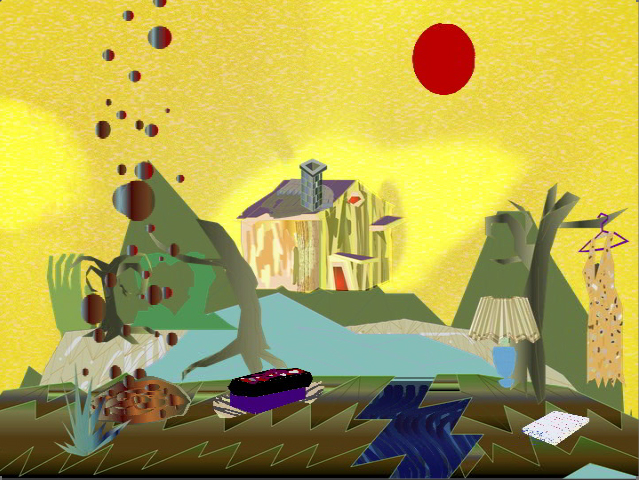 MOUTH TO MOUTH WORTH DROWNING FOR.

WITH DUAL SUNSETS CLOSING IN AT BOTH SIDES.

V A L L E Y  is a sprawling multi-dimensional body of work (books, writings, sound, video, etc) set to the tune of ominous gloom.
Its composer, Shalo P is reticent to speak about the project in full, some blame his nervous nature, or the fact that he hides himself away for months at a time in an office steeped in books and dust.
We do receive letters though, sometimes referencing a certain mythical personal figure, or else going on about the nature of "The Sister Spread" as an aspect of immediate memory, the frenzied free-time that memory naturally wisps away in its continually coiled recalibration of the self's illusions.
"We are only who we remember to be", he wrote to us. "As far back as I can recall, I've been Sister Spread", he added.

If a life were to be mapped out as points that memory guided back, like sign posts, towards some vestigial semblance of an initial self nestled in the primordial influences that doomed us to our natures, so does this exhibition peer back in order to pull this landscape with it like a black cape wherever it treads, like a valley across mountains made of lush crackling styrofoam.
If these signposts, routinely called "memory" - as unreliable guides as they are - serve some workable version of ourselves for the present, it's still to present merely the opposite of the amnesiac, another bad detective riddled with jumbled clues, conveniently framing some mishandled conclusion with withering fragments of story. "We are only who we remember to be", he wrote. And yet who is to say that this was not written by any of the myriad of interns and secretaries that ensconce the self-styled digital wizard of North Beach?

With VALLEY, Shalo P presents us another way to envision memory's lack by embracing the seemingly dark dense expanses of The Sister Spread, the space between those prized little markers leading back to the only self memory grudgingly allows, like dark energy cradling all the visible.
It is with dark energy in mind that this valley was conjured.

The spread between memories is a free place, clear of guilt, death, or memory of pain. It is a honest nothingness; the memory of trees, fields, and streams.

As with any intangible idea as heavily depended-upon as memory, whose currency frequents self-deception and subtle streamlining, we present the history of what never happened - as it did.
It crawls best across a new landscape bereft of the familiar. It is a thing complete in its regards to being incomplete. A valley is merely the tendon of mountains, a gulf bridged by the invisible - lush, foreboding, empty, or reaching - a synergy of viewpoints.

It began as a investigation into exciting forms of lust, although unfaithfully it simply mutated violently into another creature.

From The Desk Of Shalo P:

The original concept was bound by an oath between artists concerning the other as sensual canvas, with hungry bodies expressing wordless whimsy, with only a glittering gulf between them swarming with tigers.

It served as a natural extension of the work I'd made resulting from friendly dares, deals, and promises.
I'm like a vampire. I needed to be invited.
(honestly, I might just need delicious fresh warm blood...)

The work held solid promise, as the lengths they reportedly took to woo one another often took turns vicious and frightful.

After the project eventually fell through, a vast emptiness lay before the artist.
Whilst his collaborator's works were summarily pulled from the project, his still lay still abed in thoughtful incubation.
It would take some years to grasp a shape from within that void, and yet it did indeed manifest.
"It rose up with a black cape..." he wrote to us in an email,
with an attachment to a music video on youtube by Bob Welch.
"Or was it the black cape that I followed..." he added in the post-script, while also asking for additional money to get some posters done.

We could feel for him. He was left with a project without its other half, and yet stubbornly clung to his promise like Linus Van Pelt's iron grip on his blanket.
"And still, nothing is more intimate than promises kept to an empty room." he said.

When his collaborator opted for anonymity, the codename Sister Spread was adopted, styling her as a refreshed Melody Nelson, a new courageous Vivian Girl, a newly anointed Made In Heaven Cicciolina bristling in bronze.
But in this case:
"I could never hope to present the ethereal goddess. I couldn't believe in her, even though it seems that's what folk seem to talk about. But I never met an ethereal goddess. I met a real woman though, much more remarkable, in my opinion. I wanted to present that - but more specifically HER. I want the insular logic of stereo obsessions on blast, tethered like a rabid dog to the heavy weight of amorous wants, like all them vials of organs pulled out of that secret scientific research center, and laid out for viewing like in AKIRA... And there is no viler organ than the valley."

Also:
"An interesting aspect of the project is that over the years I incorporated as many and more of Sister Spread's own personal traits / talents into myself as I could, infusing myself in a well of wasted wishes,
knee-deep in coarse whore's hair.
I had wanted so much to be utterly obliterated by ideas. I wanted my body to be scoured by someone else inside my skin, thrashing at the places I pretend are tender.
But In the end I'm uncertain how much of Sister Spread resides inside me... but when I look at my maze I can't tell if I'm the Minotaur of the Medusa either."

These are the new gestures apparent in the work:
"They say La Saranghina is the devil. But Sister Spread expanded my way of thinking.
I thank her by setting myself on fire".

VALLEY is a series of whimsical gestures bridging a complex rift.
It's a searing journey of sorts, with liminal discoveries lying somewhere mysteriously beyond the horizon over the horizon.
The original premise was based on mutual lust, now it's all ostensibly about _______.

As Shalo P is wont to say, "Hell Prevails", 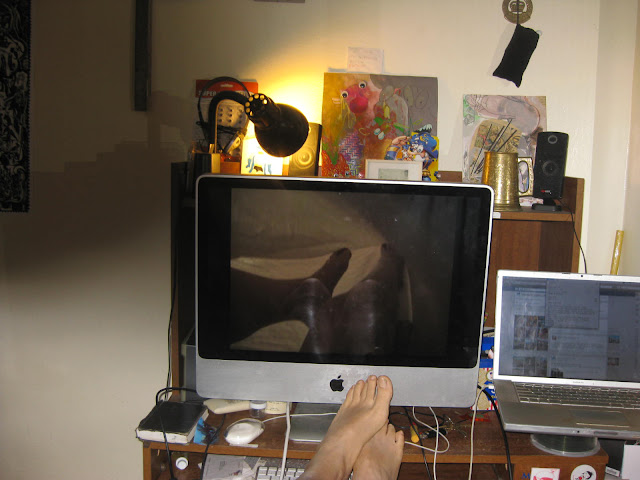 V A L L E Y  is a series of whimsical gestures bridging a complex rift, spurned on by a couple of awful freaks.

Taking advantage of our respectively rambunctious fiery personas, along with a shared fondness for flair, we initially approached the project as artists bound by love and duty. The goal was to evolve a call / response framework of frenzied pitter-patterned adulation with honestly scathing bittersweet scintillation. It was a noble quest for those of restless sex, but reality's fangs fared sharper than mere oaths.

With VALLEY, the investigation takes place long after the fact, to thoroughly assess what remains
to be gleaned with "ruse-tinted" frames.

At first, it presented a blend of structured, and semi-stream-of-thought books of funnies, and yet it expanded into videos, musical compositions, as well as a series of essays, parables, and poems regarding "The Sister Spread", and the demon named "Lust".
It has filled out into a strange subdued narrative splintering into facets of self-effacing stories - mirroring, documenting, and paralleling in tone the ultimate shape of the emptiness that engulfed the original project, drawing a silhouette of its absent half - with its exaltation to lost causes full of fire, with its wastelands of wanton energy smoldering in piles of literary lithe.

It's a clever show for clever cats.
Milky thinkers welcome. 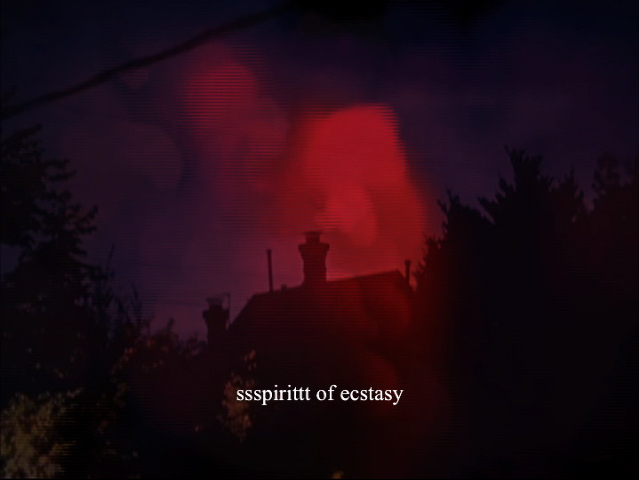 3. A Note on the Initial Death / A Letter concerning VALLEY

I wish to confess that VALLEY (the initial exhibition within a physical space) died a quiet death
during the week of Thanksgiving four years ago.
An open window enabled the warped sensibilities of the work to come through materially,
and the images shriveled up like wet leaves on the dew-dropped walls.
The show lasted five days.
Weather, the harsh critic of marriages, boating, and picnics, had poetically foiled a show earnestly concerned with the nature of "wasted energies" - which had also initially been a picnic of sorts, with a grip of small promises I was undoubtedly married to, on this swishing ship called LIFE.
An artist is nothing if not bound to certain duties - "finish it" - being paramount.
And yet, re-botched as it was, it was also revived by an ice-cold bucket
of fresh wasted energy: and so the valley widened accordingly.
Sheer resolve became implacable stubbornness on my part.

What had begun as a project fulfilling a lover's pact grew out of scope and form, spurned on by a new spirit.
The appendices to a few scattered rooms became a haunted mansion of ghouls.
Like a ghost I paced the studio looking for the links to the chains of inertia that kept my corporeal form trapped, which obscured the new shape the project had take before me.

(And yes, the show is cursed, and all that watch it will die or eventually curl into a screaming stone statue.
There, I admitted it.)

This work became a document of a time, and a place crafted by that time there.
It exist now as a shard of moment reigned upon by the ssspirittt of ecstasy. 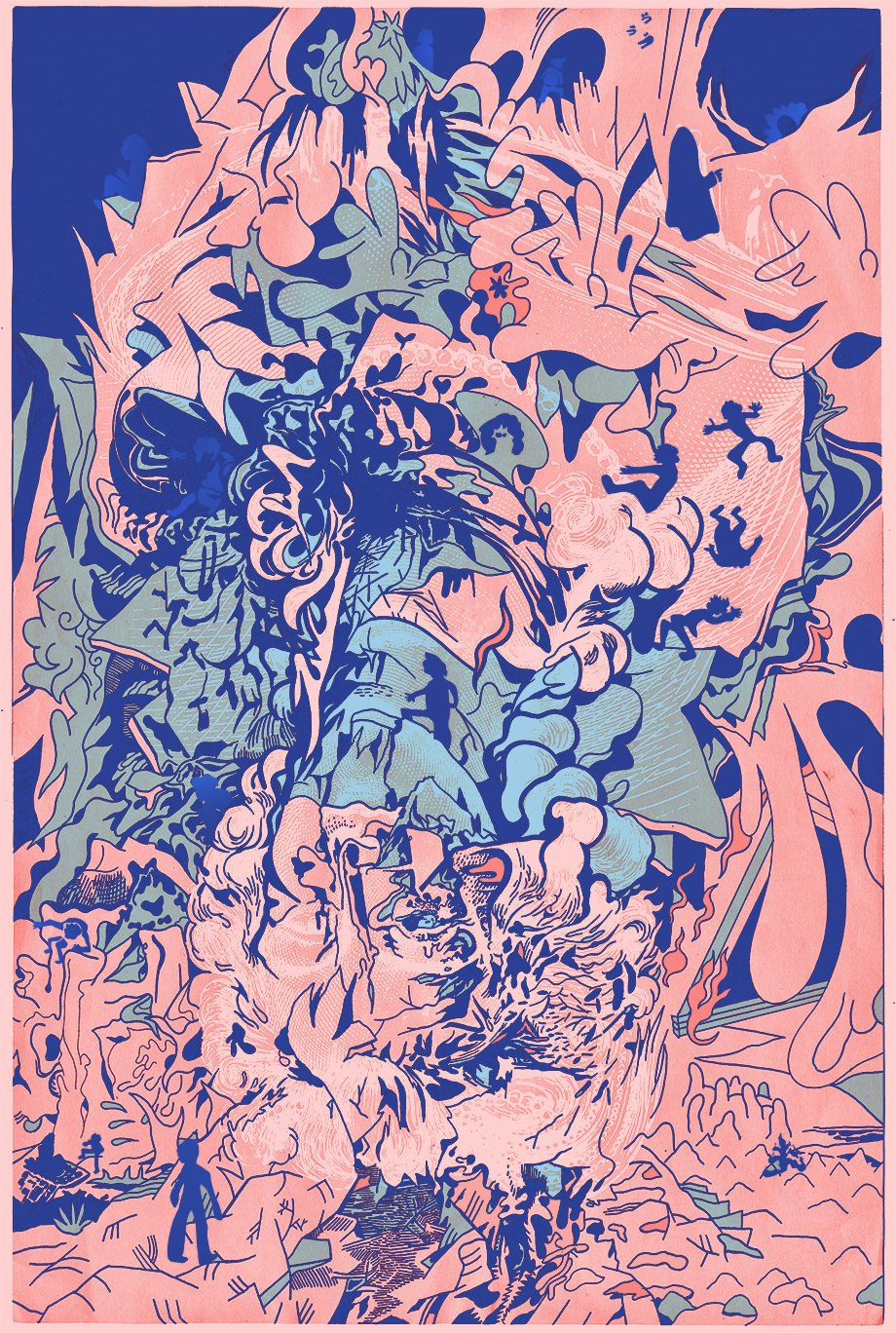